Newman Lecture Explores The Path to a Referendum 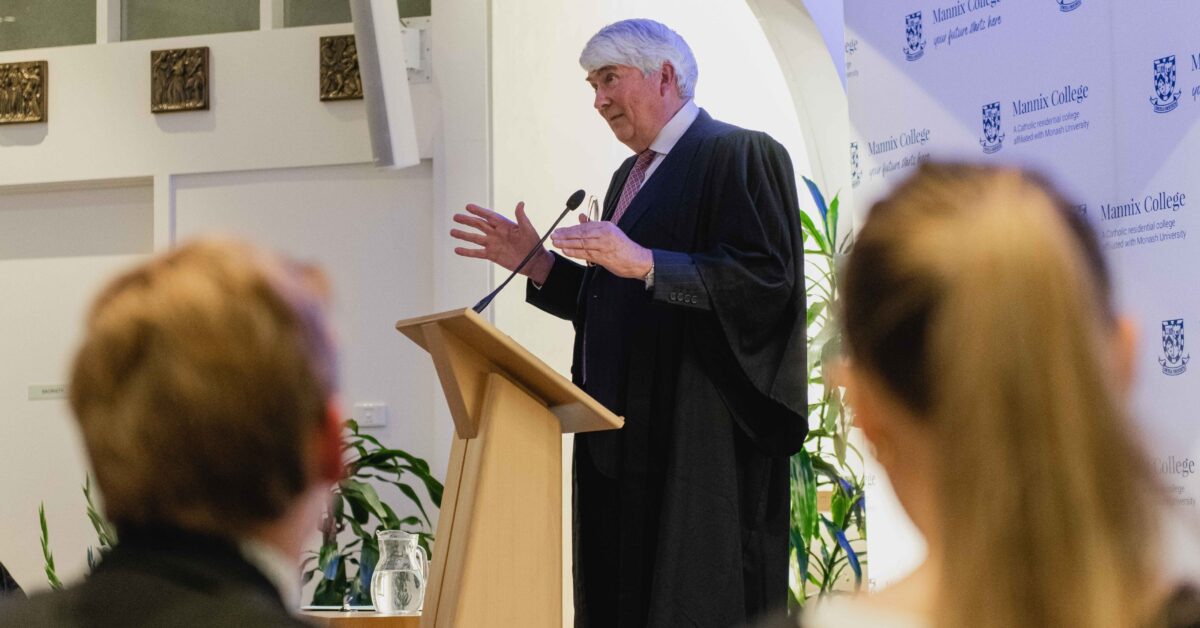 The Mannix community gathered on August 17 for the annual Newman Lecture, which was delivered by Fr Frank Brennan SJ AO.

Titled ‘The Path to a Referendum: From Uluru via Garma to Canberra and on to the People’, Fr Brennan’s speech posed essential questions facing our nation, including: what is the Uluru Statement from the Heart, what does reconciliation and truth-telling look like, and how might the history of referendums in Australia influence today’s effort towards an Indigenous voice to parliament?

“There has been a lot said about the Uluru Statement in the last three months since the election of the Albanese Labor Government. Speaking at my father’s funeral in June, Senator Patrick Dodson, Special Envoy for Reconciliation and the Implementation of the Uluru Statement from the Heart, said, ‘Today’s invitation by First Nations “to walk with us” in the Uluru Statement from the Heart holds up to all Australians the need for Voice, Treaty and Truth as the way to redress the tyranny of our indigenous dispossession. Injustice and illegality as the foundational pillars of our nationhood can perhaps be discarded to the wastebasket of history,” Fr Brennan said.

A copy of the full 2022 Newman Lecture is available here.

Following the Lecture, the College and guests enjoyed a Formal Dinner where Indigenous residents of our College and Old Collegian Inala Cooper spoke about their experiences as First Nations people. Inala is the Director of Murrup Barak, the Melbourne Institute for Indigenous Development at the University of Melbourne and her book ‘Marrul: Aboriginal Identity & the Fight for Rights‘ has just been released by Monash University Publishing.

Since 1981, the Newman Lecture series has been a major annual event on the College calendar. The series provides a prominent Australia the opportunity to share his or her views on aspects of our society- with past topics discussing cultural, political, moral and religious life. Having also delivered the Newman Lecture in 1993, Fr Brennan is now the only person to have delivered the annual Lecture twice.

The College was honoured to host current residents, members of the College Council and Foundation Council, alumni, Fellows and special guests from the Archdiocese of Melbourne, Monash University, the William Cooper Institute, Newman College and St Mary’s College at the event.

Mannix has long been committed to supporting First Nations students studying at Monash University. Today’s First Nations residents follow in the footsteps of First Nations Old Collegians such as Mick Dodson, Inala Cooper and Tom Molyneux who have gone on to lead positive change for the benefit of the nation. The Newman Lecture built upon earlier events and conversations held at Mannix during Reconciliation Week in 2022.

In solidarity with our past, present and future First Nations residents, Mannix College is united behind the Uluru Statement from the Heart and actively supports the William Cooper Institute which leads First Nations engagement at Monash University.

Father Brennan is a Jesuit priest and Rector of Newman College at the University of Melbourne.  He has been appointed a peritus at the Fifth Plenary Council of the Catholic Church in Australia. He is a Distinguished Fellow of the PM Glynn Institute, an Adjunct Professor at the Thomas More Law School at the Australian Catholic University, and a research professor at the Australian Centre for Christianity and Culture.  He was previously the CEO of Catholic Social Services Australia. He chaired the National Human Rights Consultation for the Rudd Government and was a member of the Turnbull Government’s expert panel which conducted the Religious Freedom Review.  The Morrison Government appointed him to the Voice Co-Design Senior Advisory Group to help guide the Co-Design process to develop options for an Indigenous voice to Government.