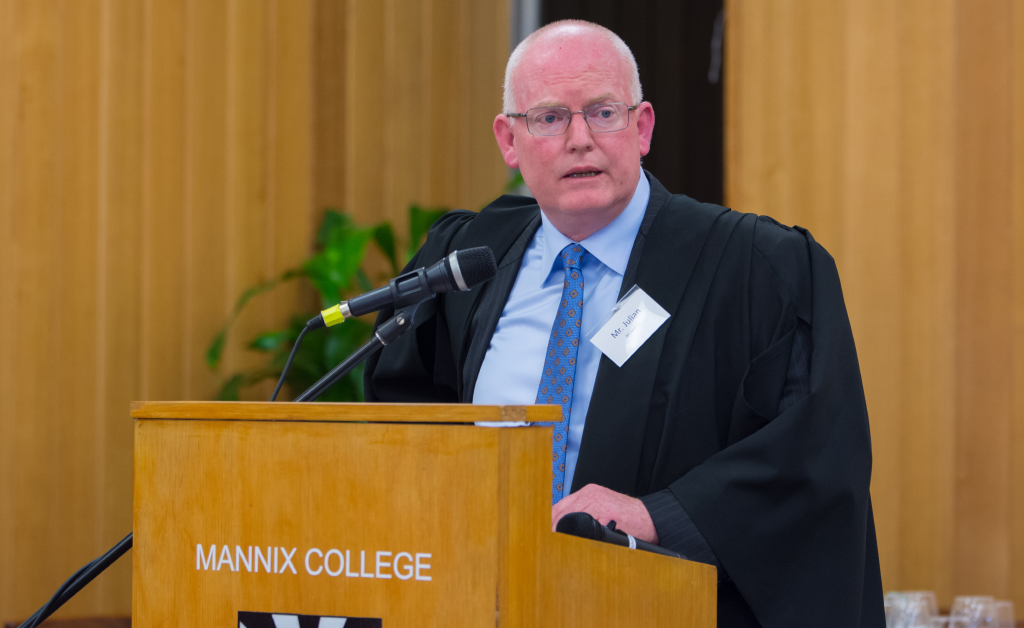 On the 8th of August 2018 Melbourne Barrister Julian McMahon AC SC delivered the College’s annual Newman Lecture on the topic ‘The Death Penalty – why do nation states still kill prisoners, where will it end’?

With the recent 3-year anniversary since the passing of Bali 9 members Andrew Chan and Myuran Sukumaran, McMahon used personal antidotes from his career to deliver an emotional speech that left the audience of nearly 300 residents and guests in complete silence.

Well known for his involvement representing Chan and Sukumaran, as well as Van Tuong Nguyen for drug trafficking offences in Singapore, Mr McMahon said he began this path of work when he was dragged into it unexpectedly, approximately 15 years ago.

“I didn’t set out to be involved with the death penalty, one day I got dragged into it unexpectedly and I’ve been in it ever since. I didn’t know about it, I didn’t pay any attention to it”.

Mr McMahon’s strong opinions on the abolition of capitol punishment and representing death penalty cases for 13 years pro-bono, have been pivotal factors leading to his achievement of recognition through numerous awards, including being named 2016 Victorian Australian of the Year, and being made a Companion of the Order of Australia in the 2017 Queen’s Birthday Honours.

With 20 000 people on death row globally, and approximately 1000 people executed last year, Mr McMahon believes the death penalty is “an issue going backwards” rather than improving. These figures, attained by Amnesty International, exclude countries such as China, who, according to Reprieve Australia, do not publicly disclose data about their use of the death penalty, but are estimated to execute approximately 60 people per week, or 3000 annually.

Mr McMahon that stated at the end of World War II almost every country was employing the death penalty, however as of last year, only 23 countries are still doping so.

Despite many other horrifying events that have occurred during this period, McMahon suggests one major success story is the general understanding around the world that regardless of a country’s particular political persuasion or religion, there is something inherently wrong with killing another individual.

“It’s a hard topic to be engaged in, but Australia has become even more engaged [in the topic of the death penalty] in the last few years than possibly ever in its history. Like asylum seekers, these issues [humanitarian issues such as the abolition of the death penalty] have become political issues… they are an indication of what is happening in a country”.

In the last couple of weeks, Australia has established a strong documented policy which has been given to all embassies and affirms our stance in opposing all executions everywhere, without exception.

Mr McMahon concluded his speech with a lingering thought that is a true testimony to his stance on the death penalty – “all lives have dignity, even the lives of dreadful criminals have dignity and value, and to disregard that is to attack humanity itself”.