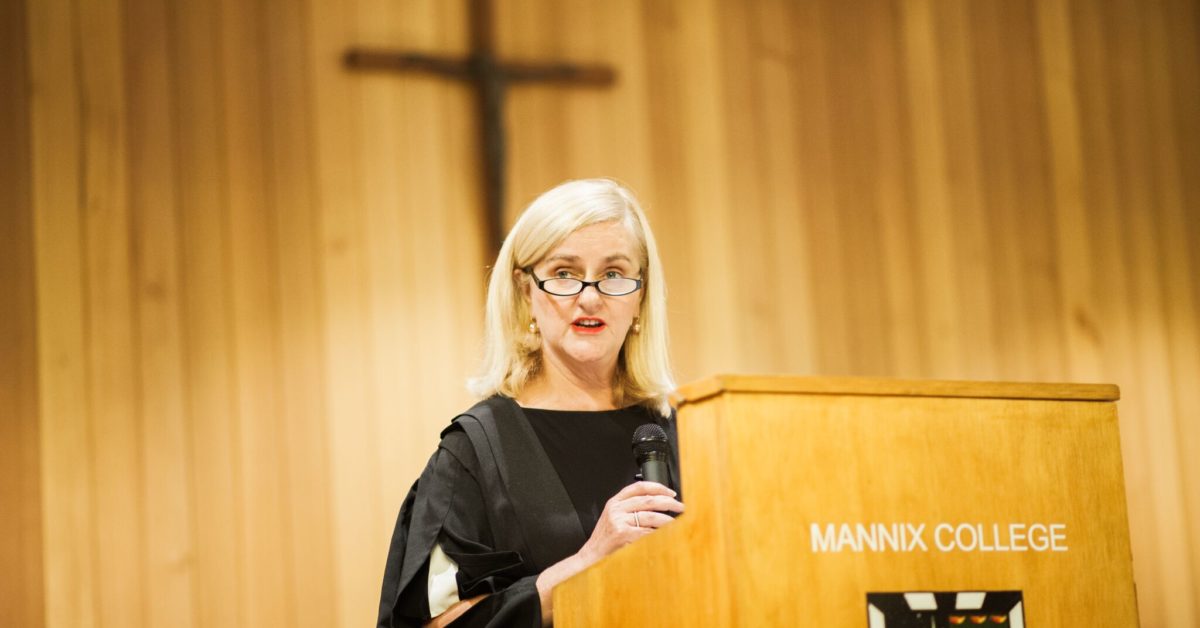 The annual Women in Leadership lecture has become a pivotal part of the Mannix College calendar, celebrating the success and empowerment of women from all sectors of our community.

In celebration of the 50th anniversary, Mannix College invited, Judge Gabrielle Cannon, a Victorian County Court Judge and old collegian of the College (1980-1982) to present a lecture on the topic: ‘Out of touch? I don’t think so’.

With a resume brimming with achievements and success, Judge Cannon delivered a speech that touches on what her career entails but also societal issues that the justice system has tried to overcome, in terms of their tasks and their workplace in general.

While the legal system is generally filled with individuals who has experienced tougher upbringings or life experiences, Judge Cannon asserts the idea that the system is not limited to these persons.

But rather, Australia’s legal system is one that ‘sees people from all walks of lives- including the privileged’, each with their ‘own stories [and] own issues.’

Judge Cannon accentuates how lucky our country, Victorians in particular, are to ‘have a legal system that deals with individualised justice,’ saying it’s not a case of ‘one size fits all’ when it comes to justice in the court room.

One major role of our punishing system for young persons is rehabilitation, with an end aim of helping them live ‘productive lives’ and ‘positively contribute to the community.’

Rehabilitating offenders is seen as a ‘win win’ situation, as it provides positives for both the offender and our community; the community is ‘better protected’ if we focus our efforts on preventing future crimes from occurring.

‘One day in jail is a very long time…prison is not a place that anyone in their right mind would want to go, it’s a hellish place,’ says Cannon.

Shifting away from what her career entails, but rather to how her job is carried out, Judge Cannon touched on the issue of gender balance in the workplace; a prevalent topic in the media in recent years in all sectors of employment.

Further, she emphasises that judges are ‘confronted with a great deal of the real world on a daily basis,’ in particular the negative aspects of our community.

In 2014, a wellbeing program, the Supporting Judicial Resilience Program, was implemented in the County Courts as the jobs of our judges ‘was recognised as a particularly stressful one’- Cannon states that herself and her coworkers often see psychologists to debrief about their careers.

Concluding the night with a Q&A, Judge Cannon notes that while she has years of practice, it ‘doesn’t mean [she’s] not affected by what [she is] seeing and hearing’ in her professional day-to-day activities.

To see a recap video of the night, click here.